Review by Zinta Aistars
(From The Smoking Poet, Fall 2010 Issue) 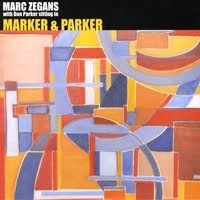 
Let’s get that disclaimer out here right at the top: I don’t listen to too many spoken word CDs. Marc Zegans’ Marker & Parker is only the fifth such CD that I’ve been sent for review, so I consider myself a novice at tuning my ear to poetry coming out of my stereo system as I make my too-long daily commute to work down the interstate. Thing is, I don’t see that changing much. I adore the written word. I like my poetry on the page in front of me. I go to a great many poetry readings (which are worlds apart from going to slam poetry sessions), and at least in that venue I can say, with some expertise, painfully few poets can read their work well to an audience.

So there you have your scene set. Spoken word, or slam poetry, poetry on a stage, really isn’t my thing. It’s guzzling down something hard and fast that I prefer to sip and savor in solitude. And then there is this difference, too: when you see spoken word poetry written down on a page, it is nothing, but nothing, like poetry written to be seen on the page. I’ve listened to just enough spoken word that it is clear to me that it requires an entirely different approach to language. It is, after all, a performance. These are words meant for aural delivery. Not just words on a page here, but the poet him or herself, a physical presence, a voice, rich with inflection and tone and profound delivery.

I pop in Marc Zegans’ Marker & Parker and rev up my engine for the drive. Instantly, it works. Rack ‘Em. I hear a pool cue snap against a hard billiard ball, and Zegans’ voice snaps with it to bring me to attention. Jazz pianist Don Parker is playing in the background, at just the right level of enriching the reading, rather than overwhelming it. Okay, okay, I’m listening …

Drag queen in a sheer silk dress
Gives me the eye.

Popper wiff hangin’ in the air.
I ignore him and break.

At the far end of the table.
Balls scatter.

He gives me the eye
Shows me some thigh.

Feel the mood? You may or may not. This, again, is not meant to be read, but heard. Imagine a deep, silky voice—one that, mind you, reminded me a little of a loosened-up Al Gore if we were to find him in a smoky pool hall. Zegans weaves his voice with the mood, making the mood happen, lets it bounce and sway with the jazzy blues, draws it out so that you feel that sheer silk dress swish across that bulky thigh. He purrs and slinks and pops and seduces.

Don Parker keeps tune in back. The master is always the musician who knows when to support, not to take center stage. It is improvised jazz, loose and easy, now and then nearly missing a note, but with a swift save and back again, nothing jarring. Unlike some of the other spoken poetry CDs I’ve heard, he knows his perfect place, and his style blends perfectly with Zegans’ style, one complementing the other. On Love that Waitress, Marc Zegans steps in himself with a jazz piano solo, to let us enjoy his dual talent.

By the end of my first listen to Marker & Parker, I was in that jazzy groove, and would rather have gone to some smoky lounge than my office. By the time I was driving home again, I was ready for a second listen. Which is saying something. One of my personal puzzles over spoken word CDs is wondering how many times might one want to listen to the same poems being read/spoken again and again. Some half dozen times later, I seem to be approaching an answer.

By now, my smile is ready as I ease into another listen. By now, I have asked Zegans to provide me the written lyrics, too, and to my pleased surprise, they work well on the written page, too.

High above the plunging hill, Jay sits
facing empty glass, his room spare
a music stand, a chair, a sigh, a sax
a silence, and curling sheets of noted
lines

And by now, I can hear Zegans’ voice in my head as I read, the two becoming inseparable, word and voice. It turns out "Sunken Contents" may even be better on the page, as it is a shape poem, moving out like a wave and then sinking back again … yet Zegans accomplishes the same effect in reading it.

In the moment of fall
the slur, the cut, the jibe,
fast snapping, decapitating,
wind driven swing of the boom,
roll over—you dropping too fast,
too deep for them to touch, much
less bring you level. Proclaimed Mingus
you can't be brought low when you are beneath
the underdog, and falling fast from that subjugated
position, humiliation is an indulgent luxury, consumed
by those who imagine that loss of position carries meaning
to the death…

Zegans’ poetry is about the dark and seedy pool bar, yes, and the drag queen, but also moves into political themes, taking the “clown prince” to task (with allusions to philosopher Richard Rorty), with references to the Kennedys, delving into some 30 years of American political history. The author states it is his answer to “Howl,” with an encouragement to the listerner/reader to do more than just howl. There is also a sassy seduction of a waitress while mopping up gravy with slice after slice of white bread (“Mile High”), and a statement about the desensitized health care system that treats a human being like a body with its tickings recorded on a chart, rather than a man also of heart and mind (“Him”). Zegans even manages to make a statement about our over-processed food in “Too Fucked to Drink”: “…where health school lunch/is six french fries/and ketchup, not rotting,/is a vegetable.” In short, there isn't just mood here; there is also plenty of substance.

Another listen, and I have some walls and misperceptions about spoken word poetry broken down. It is indeed something that you can plug into your stereo more than once, each time gleaning something new and different. It can work, sometimes, on the written page just as well, or in addition. And there are voices, and performers, and pianists, such as this team of Zegans and Parker, who know how to work together to bring alive a performance that is a true pleasure to hear, to contemplate, to play again … just one more time.


To see this and many more reviews, visit Zinta Reviews on The Smoking Poet!
Posted by Zinta Aistars

Thought you might be interested in my blog. I run a collaborative blog - DysfunctionalBeginnings.com. Literary works about growing up, family, and beginnings in general (expressed in a variety of mediums!) Submissions go to dysfunctionalbeginnings@gmail.com.
Let me know what you think!
Thanks for your support...