Woodswoman: Living Alone in the Adirondack Wilderness by Anne LaBastille 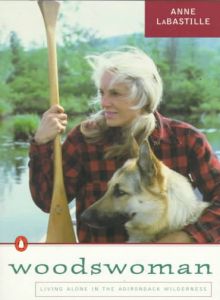 What a comfort, as I contemplate my lifelong dream to move to a cabin in the northern woods in coming years, that another woman has done something similar in her life some decades ago, and made it work for her so well. Even as Anne LaBastille was troubled by the very same concerns and questions as I am, she found ways to overcome, do without, cope, embrace, and handle the challenges that came her way. A woman alone in the woods … how safe is she? What if she gets sick or injured? How to handle wildlife or rough weather or fire? How to handle trespassers on her property who may be inclined to hurt her? Will she be able to pay her bills as a freelance writer?

When Anne LaBastille was still a relatively young woman, her marriage ended in divorce. She had to find a place to live—quick. In two months’ time, she found a remote plot of land in the Adirondacks, and she set to work building her own log cabin. With only a bit of help in the heaviest or trickiest part of the labor, LaBastille designed and built the cabin herself in short order.

Mind you, this is no burly Amazon woman. The photos in LaBastille’s autobiography show a slender, pretty woman, deeply tanned, flannel shirt sleeves rolled up on her sinewy arms, comfortable in her jeans, hair in long braids or ponytails, chainsaw in hand. Nor is she even particularly assertive or bold. At times, she’s downright shy. She’s just a woman who is comfortable alone, knows how to take care of herself, and loves nature.

LaBastille has had a loyal following of readers ever since her series of Woodswoman books first came out, beginning in the mid 1970s. It seems while few do what she has done, many hold a dream in common about a cabin in the woods. Her cabin in the woods is quite primitive, in fact, with no electricity—she powers anything that requires power by generator or propane gas—and no running water—her baths are mostly taken skinny-dipping in the lake each morning or by heating water in a small tub on her outdoor deck—and without a flushing toilet—she uses an outhouse with a view. 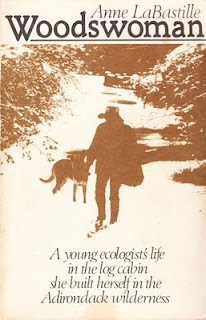 The author’s style is easy and friendly, even while she makes it clear her door is not open to just anyone. She does not appreciate intruders, is wary of her fans, and has no qualms about tossing hunters off her land with a loaded shotgun. Indeed, she encourages a reputation of being called, as one of the hunters snarled at her, bitch. It helps enforce her privacy.

This is a love story of the first order. Sure, there is the romance, initially between her and her husband, who taught her to be a better camper and how to use a chainsaw, and later, there is a romance between her and a man who visits her on weekends from his life in the city. She chooses her cabin and solitude first and foremost, however, when he invites her to accompany him to Alaska, and that’s the end of that. No, the real love story here is between Anne LaBastille and the Adirondacks, between the author and a woman’s closest friend—her dog, Pitzi. No matter what conflict or friction, hurdle or challenge, or test of endurance the wilderness tosses her way, LaBastille finds a way to deal with it and emerge victorious. Mind you, she isn’t trying to beat nature at her game. LaBastille is nature’s ally, woman to woman, and her approach to the challenges of living this kind of lifestyle are respectful. She works with nature rather than against it.

The stories of her life enchant. Descriptions of the changing of seasons are beautiful, as are moments of sitting on her dock on the lake to watch a loon or an otter swim by, or hiking through mountains with her faithful canine friend alongside her. She shows the reader the beauty of her home without whitewashing the mistakes and miscalculations she makes with it. Living as she does is a constant learning process. Nor does she do entirely without the help of friends. When accidents happen, and they do happen, help finds its way to her. She knows when to accept help, and when to be stubborn and stand her ground.

About one unexpected effect of living as a woman alone in the wilderness, she writes:

“The process of learning how to cope as a woman alone had backfired to an extent. I had noticed that the more competent I became, the more insecure certain men acted, or the more aggressive others behaved toward me. It was as if their inferiority complexes were showing, as if they couldn’t stand to have a female be better at anything than they.”

To some, LaBastille may be an enigma. How can a woman be so feminine and strong at the same time? So tender in some things yet so harsh and sturdy in others? Perhaps these are questions some may ask, but I took comfort in reading about this woman who was, simply, a woman—competent, intelligent (she has a PhD), self-sufficient, strong, spirited, yet open-hearted to those who brought added meaning to her life and respect to her wild corner of the world. Her comparison between living in the wild and living in the wild city is really quite hilarious, and makes the point: choose your risks. The wilderness may be far from the scariest place a woman can live.

Added notes on ecology are a major bonus of this memoir. By living in the woods, the author learns how deeply pollution of various kinds has affected our earth. Acid rain kills off lakes until they can no longer be fished. Development efforts seem to be a constant threat. Noise pollution proves a daunting enemy. The greatest challenge LaBastille faces in her wilderness is to preserve it. This isn't just one woman's story; it's a wakeup call.

“Still the cabin is the wellspring, the source, the hub of my existence. It gives me tranquility, a closeness to nature and wildlife, good health and fitness, a sense of security, the opportunity for resourcefulness, reflection, and creative thinking. Yet my existence here has not been, and never will be, idyllic. Nature is too demanding for that. It requires a constant response to the environment. I must adapt to its changes—the seasons, the vagaries of weather, wear and tear on house and land, the physical demands of my body, the sensuous pulls on my senses. Despite these demands, I share a feeling of continuity, contentment, and oneness with the natural world, with life itself, in my surroundings of tall pines, clear lakes, flying squirrels, trailless peaks, shy deer, clean air, bullfrogs, black flies, and trilliums.”

As for me, reading LaBastille’s honest perspective on her life alone in the woods is refreshing and inspiring. I moved quickly from this book to the next one in the series, reading that one just as quickly. I can understand why she has such a following of admirers. She has lived the dream of many that very few will ever realize. She has been true to herself, and that takes courage too many lack.
Posted by Zinta Aistars