The Psychiatrist, poetry by Mariela Griffor 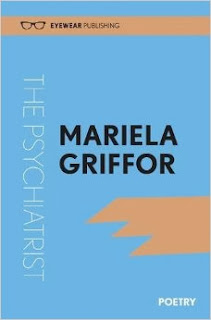 I’ve had the privilege to read the galleys for Mariela Griffor’s third poetry collection, The Psychiatrist, which will be published in late October 2013. The experience is mesmerizing, even healing.

My introduction to Griffor’s work came through Exiliana, her first collection. Thirteen poems from that collection are included in this one, only two from her second, House, and twenty-one poems are new. In them all, Griffor allows us windows into her remarkable life.

Born in Chile, Griffor was a Chilean opponent to the military regimen of General Pinochet  in love with another such opponent. Their love story is a tragic one; he was assassinated, and Griffor, expecting their child, was exiled to Sweden. Eventually, she married an American and moved to the Detroit area in Michigan. Much of this life story appears in her work, in the tender ache of a lost love, in the fierce love of a mother for her child, in the love for her ancestral home left behind.

In these poems, we step into Chile, Sweden and, finally, the streets of Detroit. We visit Griffor’s broken and patched-again heart. We step into her life. Griffor exposes her vulnerability with courage, but then also lets us see her resilience, her street smarts, her determined survival.

“I should have died but the devil/did not want me,” she writes in the poem, “Code Names.”

Griffor does not write dense poetry. I say this as a compliment. To call her an accessible poet, too, is meant as a compliment. Her images are clear, in almost plain wrapping, and nothing stands between the poet, the poem, the reader.  It is as if the poet has unzipped her skin and put her core self on the page, the experience of her life, and allowed us entry. And not just us, but also a kind of alter ego, an invented friend: “I invent a friend to pour out/remembrances of the old country” (from “Prologue I”). She finishes that poem so: “As I invent you, I invent myself.” With that, Griffor states plainly and clearly the truth of all writers, that literature is an unveiling of self, and in so doing, a kind of therapy, an easing of loneliness, a word-balmed healing, an invitation to the reader to come inside and connect, if even for just an instant in time.

And we connect. Griffor holds up no barriers. There is a disarming sincerity to her poetry. She asks the questions we have all at some time in our well-lived lives asked. “What do we do with the love if you die?” (from “Love for a subversive”). She births grief like she births new life, and in that birthing of a grief, its slow laboring, it’s painful entry into the light, one realizes just how alike these two processes are, and the prizes for enduring both: new life.

“Maybe just poets can understand each other, /even bad poets have another language. It is like/the words are invented only for those who love them,” Griffor writes in the new poem, “Death in Argentina.” To some degree, that may be, but no one is left standing outside Griffor’s gate. If not all of us have experienced exile, most all of us have known rootlessness, being lost in the sea of life, and to that part of us that we keep hidden, protected, denied, unloved, shamed, wrapped in secrets and lies, to that part Griffor reaches out and gives a healing touch. Much like a psychiatrist.

Mariela Griffor is the author of Exiliana (Luna Publications) and House (Mayapple Press). She was born in the city of Concepcion in southern Chile. She is co-founder of The Institute for Creative Writers at Wayne State University and Publisher of Marick Press. Her work has appeared in periodicals across Latin America and the United States. Griffor is Honorary Consul of Chile in Detroit, Michigan.
Posted by Zinta Aistars No comments: