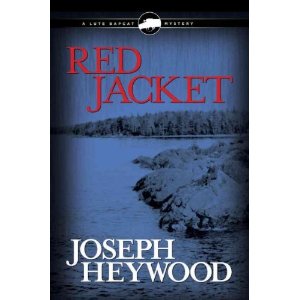 Sure, I’ll admit it. I’m a Woods Cop groupie. You know, that gritty mystery series by Joseph Heywood about Michigan’s Upper Peninsula, Grady Service and his sharp wit and expert moves through the woods, catching up with the eccentric bad guy(s). So now there’s Lute Bapcat—and author Joe Heywood is still in good form picking odd names. There’s a story to this one, this odd name, but that’s in the book pages for your own reading.

Is Lute Bapcat a predecessor of Grady Service? Who knows where this new series will go, or if it might connect to the woods cops of today, but I rather hope so. Bapcat has his beginnings as one of Michigan’s first civil service game wardens. The story opens fast in 1898 with Colonel Theodore Roosevelt shouting for his sharpshooter. That would be President Teddy, and the man with the sharp eye and precise trigger finger—Lute Bapcat, Rough Rider, beaver trapper in the Keweenaw (the peninsula off the Upper Peninsula, stretching its crooked finger into Lake Superior) and cowboy.

In the early 1900s, the Keweenaw was a bustling industrial center with its fortune-making copper mines. Today, the area is quiet, drawing mostly only tourists and history buffs, and some of the mines are now open for tours. Having lived in the Keweenaw myself for a while, I have long been fascinated with the history, imagining the lives that were lived out in those old mining towns, and the lives that were lived out in the dark, far below the ground, in those mile-deep mines. Bapcat gives us a window to see into that time and brings Michigan U.P. history to vivid life.

Heywood’s trademark is always to bring a colorful cast of characters to the pages of his novels, and he does so again in Red Jacket. Along with Bapcat himself, a loner from Copper Harbor, now pushed back into a messy civilization of corrupt village leaders and mine owners, there is his love interest, Widow Frei, suspiciously something like a Madam in town and who requests regular payment on Bapcat’s “debt” by visits to her bedroom; the hilarious Pinkhus Sergeyevich Zakov, who becomes Bapcat’s sidekick and “wife”; George Gipp, the ballplayer from Laurium (you’ll recognize him from “one for the Gipper” fame); and Big Annie, a character based on history who played an important part in the bloody miner strikes, and many, many others.

The characters are placed within well researched historical events: labor strikes that escalate into horrific violence that finally conclude with the Italian Hall disaster in Calumet, where 73 lives, mostly women and children, family members of striking miners, were lost. An arc and monument from the Italian Hall can still be found in Calumet (once called Red Jacket) today. And part of the mystery trail is traversed by one of the newest contraptions of the time—a Model T from a man named Henry Ford in Detroit.

Bapcat and his sidekick Zakov try to bring some order to the Keweenaw as countless deer are found decapitated and rotting in the woods, and water streams are poisoned, killing fish and making well water undrinkable. All of this is meant to force the miners to return to the mines or die of starvation, but survival in the mines means coping with inhumane conditions. The Michigan governor seems to be turning a blind eye, while the local law enforcement is riddled with corruption.

Heywood is as sharp as ever in his storytelling skills. His sense of humor is ever present, and his characters come alive in Technicolor, a movie playing out before the reader’s mind’s eye. The dialogue is always realistic and spare and often laugh-out-loud funny. Although there was a midpoint in the story where I thought it might be edited back a bit with a bog of historical detail, it didn’t take long before I realized I would be making the switch easily enough from a Grady Service groupie to Lute Bapcat fan. Heywood remains my favorite author when I crave a good mystery, set in northern wilderness. Just enough hints were laid out for future stories in this new series, and I am eager to follow the trail.

Joseph Heywood is the author of The Snowfly, Covered Waters, The Berkut, Taxi Dancer, The Domino Conspiracy—and the eight novels comprising the Woods Cop Mystery Series. Featuring Grady Service, a detective in the Upper Peninsula for Michigan’s Department of Natural Resources, this series has earned its author cult status among lovers of the outdoors, law enforcement officials, and mystery devotees. Heywood lives in Portage, Michigan, but spends much of his time riding with the real woods cops in the Upper Peninsula. For more on Joseph Heywood and the Woods Cop Mysteries, visit the author's web site at www.josephheywood.com.