When the friend who sent me this DVD as a gift wanted to know what did I think of it, he knew I would tell the truth. My truth: I wanted to slap this simpering, snickering, snuffing little man NOW. As he spoke about life being in the now, and that the future is now, and that even if we were capable of time travel, the moment we arrive in that other time would be NOW, well, I simply wanted to slap him silly. In this moment. Now.

And really, I don't think I am so utterly intolerant. But all those odd little noises he makes. Oh. The little burps in the back of his throat as he sips from his water glass, now, and the seemingly involuntary (and maybe they are) little snufflings and simperings, the way he would laugh without laughing, as if it were such a dirty joke that our laughter must be politely suppressed ... oh, what an annoying being. In my now. That I would rather have in the past. The other and previous now.

All right, all right, so I get what he is saying. But it is not exactly an earth-shattering revelation, is it? That if we are always thinking of tomorrow, where we wish to be, all the changes we might desire, how we would improve on now if only, if only ... then we miss this moment, now. Got that. And on the other end of that time spectrum, if we are forever wallowing in our past, those golden days long gone, hind sight tainting them to a more golden hue than they ever were when they were NOW, and longing for some impossible return or revision, again, we miss this moment, NOW. Which may just be the most golden moment yet. Got that.

Yet isn't there great wisdom to be found in a bit of introspection? The learning of lessons, result of past mistakes, would be that. And shouldn't we have a few goals in mind down the road, some focus on which to train our eye, that we might actually be able to begin building, now, for that now to come?

Seems to me, the magic word here is not NOW. It is more like, BALANCE. Not overly staring over our shoulder lest we bump into some wall; not overly gazing toward the horizon, because it could be a very different horizon by the time we get there. It's all in the balance, not the extreme.

Not much of a water drinker, anyway. Put that water glass down, Eckhart, before you spill it ... in the future. Yeah, and Oprah? Missed on this one. My gifting pal? Still. Now. A pal who knows I tell the truth. As I know it. In this very moment. Could change tomorrow.
Posted by Zinta Aistars 3 comments: 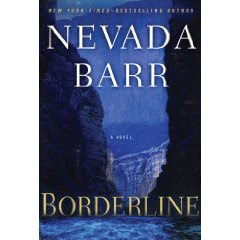 Tucked away on a wilderness retreat for a weekend, cozied up in a rocking chair by the fireplace, I opened the cover of the review copy I had received of Nevada Barr’s newest novel in the Anna Pigeon series, Borderline. One of the best things about receiving review copies of books in the mail, frequently unrequested, is that I end up reading books I would never consider on a bookstore wander. This would be one of those. The cover illustration is a little too cheesy for me (rushing river rapids between high blue cliffs), a series of any kind is a bit of a turnoff (note to series authors: get over it and move on to your next character), and a detective story by any measure (beyond cliché) would have had me at a quick trot past this one. But retreats are a time for escapism from our usual reality, so I cracked open the cover to read.

From the book jacket I learned that Anna Pigeon, the park ranger of this now 15-book series, is apparently quite a popular read. You don’t reach 15 without fans. Must be something to this, I thought. Either sheep mentality, or, one would hope, something of value. And, admittedly, I was finding curb appeal here. Anna is no gumshoe. She is, after all, a park ranger, and my wilderness-loving self warmed to the idea of each book having a backdrop of a national park rather than the cops-and-robbers’ inner city. I am also interested in strong female characters, as much of my dislike for detective novels is that too many are based on Bogie-like womanizers, forever saving (and subsequently “doing”) “damsels in distress.” Look, there wouldn’t be so many damsels in distress if there were fewer womanizers wandering the landscape. I was ready to give Anna a chance.

The cool and sharp Anna, independent to the bone, found favor with me in the first few pages. Independent, sure, but she also knew how to be soft for that one special man—her husband, Paul. Her vulnerability showed in a recent diagnosis of PTSD (post traumatic stress disorder), an after-effect of the novel preceding this one … a story about a killing in which Anna had been involved (without regret) on Isle Royale in the Upper Peninsula of Michigan. Anna and her husband head south to Texas for a much-needed rest, planning on rafting the rapids of the Rio Grande in Big Bend National Park. Also on the raft trip are four teenagers and the raft guide.

To no one’s surprise but maybe Anna’s, the trip is far from soothing. Instead, we are quickly pulled into another mystery, replete with half-drowned bodies and illegal border crossings, a corrupt politician and her philandering husband, a sassy and savvy journalist sniffing out a good story, snipers on mountaintops and falling dead bodies, suspect security guards, whiny teens, a sacred cow, and even a C-section performed with a pocketknife on a drowned corpse. Rapids, indeed. Yet among all this chilling, fast-paced, page-turning stuff, I also found snippets of delicious humor that had me laugh out loud, or else simply snicker in female comrade recognition.

And I thought I was the only one with that observation, ha!

Barr could also slip in a political statement while addressing border laws and drug wars:

“America no longer wanted anybody to give her their tired, their poor, and their huddled masses made people’s blood run cold.”

Or the occasional jibe at religious views: “Should there be a heaven it would probably have a border patrol that put Homeland Security to shame.”

Mostly, Barr just did what she apparently does best: she kept me turning pages, putting another log on the fire, turning more pages, then reading late into the night. I like this Anna. I get the way her mind works and how her nerves settle. And I enjoyed, rather than the damsel-chasing for which this genre is known, having a warm, caring marriage as the backdrop for our heroine. Goodness, Paul even touches her on occasion simply to show love, with no demand for the night to end in more. What a guy. He gets that his wife mostly just needs him to be there. There is plenty of passion and mutual physical admiration, but placed strategically to tell us more about the characters than for cheap and gratuitous thrills. Nice.

The mystery is solved satisfactorily, if not exactly with unpredictable results. Anna’s devotion to the orphan child she saves from the river turns very quickly to the aloofness of a woman who is not maternally inclined—too suddenly not to be a bit jarring. Overall, Barr has a snappy, sharp style, not particularly literary, but with moments of wit and sparks of humor; she knows what she is doing with this genre. The main character is engaging enough that the reader quickly and easily grows fond, and so, to my own surprise, I added a couple more Barr books on my wish list. Anna Pigeon is the kind of main character women readers enjoy: the right and realistic mix of strength, intellect, softness, introspection, independence, with an ability to lean on, and be leaned upon by, one trustworthy man.