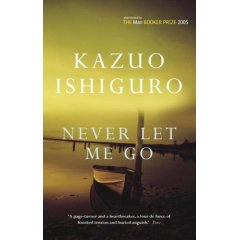 
Never really had me to let go of me... nevertheless, Kazuo Ishiguro's Never Let Me Go was an intriguing read, reeling me in ever so gradually, nearly losing me, never fully snagging me, but throwing me bait of disconcerting revelation just frequently enough to keep me turning pages. By end, I had to admit I had enjoyed reading the book more than, well, than I had realized while reading it.

Which is the kind of odd quality, odd hold, this novel has over the reader. Ishiguro writes in unassuming language. His story seems quite ordinary, initially nothing much more than a coming of age tale, and it runs over 80 pages before I got my first real jolt. Even that, more of a tug than a jolt. The reader begins to notice something strange going on, little weirdnesses tucked between the everyday routines. Once the reader realizes the scene unfolding is not quite as ordinary as first thought, interest grows. 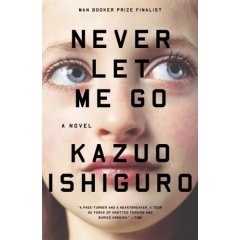 This is a dark tale of human beings being treated as less than human beings, of human clones grown and nurtured for the sole purpose of harvesting their organs, and their less than humane treatment, even though in appearances humane, based on various societal biases or perhaps only less than clear thinking, or faulty value systems. Indeed, this is Ishiguro's mastery. He has given something very dark, some might say evil, a face so bland it goes almost unnoticed. And, isn't this how evil pervades society every day? Monsters are rarely big and green and warty. Strangers are often your favorite uncle, or the boy next door. The taking down of civilization is not done with a big bang, but with nibbles and bites, a gradual desensitization. Ishiguro's evil is seemingly meek and submissive, as if done for the wellbeing of the masses, and that may arguably be the tactic used most successfully. In novels as well as in life.
Posted by Zinta Aistars No comments: 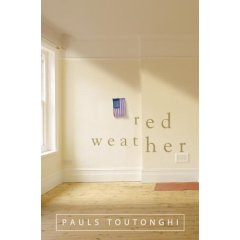 We Latvians are a small nation, but oh, we are a proud people! We are a nation beaten and battered by many wars over many hundreds, even thousands of years, but our culture and life sense still thrive: the Latvian language is one of the oldest in existence today, still actively used. Perhaps that is our greatest source of pride, then: we are survivors.

When Pauls Toutonghi's new novel, Red Weather, came upon the literary scene, I was greatly pleased. I've been an avid reader in both languages - Latvian and English - since earliest childhood, but however many good books I read about the war and later experiences of Latvians immigrating to other countries and cultures, it was rare to come across a worthy tome in English. History books, yes, but far more rare, a good attention-grabbing novel that I could proudly share with non-Latvian friends.

Now, here's Pauls. With one Latvian parent, it is my understanding he has grown up in the Milwaukee area, active in the Latvian community and, having visited Latvia, is well-acquainted, one would suppose, with the culture and something of the nation's history. For these reasons, I read the novel with high expectation and excitement.

Pauls' writing abilities do not disappoint. Still quite young, he has already accrued an impressive publishing history, and has won the Pushcart Prize. His descriptions are lively, his storyline pulls us along, his sense of humor is intact.

And yet. The further I read, the more I realized, no, this was not going to be the book that I would pass on to Latvians I know, or to non-Latvians I'd like to invite a little more intimately into my multi-cultural world. The novel works as an entertaining read for non-Latvians, perhaps, but for those who do know the history and culture, well, not so much. I think my sense of humor is healthy, but I can't help feeling, for instance, that describing Latvians visiting the United States as being so dense as to put ketchup on every possible food, even bananas, craving to taste the American life, is taking the joke into the much less fun realm of ridicule. Or the Latvian mother as so eye-rollingly lacking in self-awareness as to walk Milwaukee streets wearing a Pabst hardhat with a beer can on it as if she were wearing a Parisian fashion statement. Surely not. I cringed in embarrassment. Humor is often built on slapstick and exaggeration, but would those who have no other knowledge of Latvians, perhaps never will have any other exposure than this novel, think this is what it means to be a Latvian? Bumbling fools?

Perhaps even more worthy of remark are some historic inaccuracies. Although this is a fictional work, even fiction must keep its feet firmly on factually solid ground before branching into fantasy. One such example is the allusion to Latvia's president, Karlis Ulmanis, and his attempt to escape to Finland during the Soviet invasion of World War II (see page 166). In fact, President Ulmanis held his place, broadcasting over the radio waves to the nation even as the Soviet tanks crossed the Russian border, keeping down the panic and requesting all to remain in their places, thus saving many Latvian lives. He was taken by force from his office by the occupying army, and was never seen alive again. Educated guesses are that he was deported to Siberia, where he died in a Gulag (concentration camp), but his body has never been found.

Having finished the novel, wondering at how very different the author's experience of his Latvian roots and culture were from mine, indeed from anyone I have known with Latvian roots and having gone through the immigrant experience, I wanted to think - hey, there's always the exception to the rule. If by 1989, when this story is set, any Latvian immigrant I or my family knew had established themselves in relative financial security (the fictional Balodis family still lived in squalor), had attained some measure of their new country's education and achieved something of their own immigrant American dream, then the Balodis family was certainly a lone exception to the rule. Nor could I imagine my own father, or fathers of my friends, being so easygoing about the political lines the young man in this novel, Yuri (Juris), crossed in his lovelorn relationship with a socialist girl (my own, and dare I say any typical, Latvian father, would have gone through the roof, to put it very, very lightly).

As a reality check, I shared Red Weather with my parents, who shared it with several of their friends. Their reactions were the same. They expressed admiration for the author's skill, but also expressed a pained disappointment in the skewed image of Latvian immigrants to the U.S. The image the book leaves is of a people who are gullible, not particularly industrious, and rather dim-witted.

An opportunity lost. My subjective opinion, but I'm sure shared by more than a few of my countrymen and women.
Posted by Zinta Aistars No comments:

The Book Thief by Markus Zusak 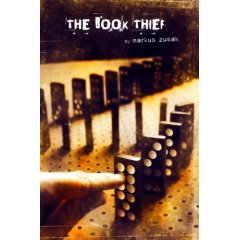 
How rare the times that we read something entirely new and unique! It has been said that there are no new stories to tell, and I will not argue that. There really are only a few novel plots, although it is in our endless variations that we set ourselves apart as writers and word-artists, perhaps also as readers, in the manner and voice in which we tell the story. This is true for Markus Zusak in his creative storytelling of The Book Thief.

The story is one of the oldest ones told: the narrator is mankind's friend/nemesis, Death, ancient as Time itself, and the scenes Death (not without compassion and not without wry humor) narrates for us are those of human suffering and endurance, an eventual overcoming of conflicts and obstacles, a story of love pitted against hate, of the victory of the best in all of us over the worst in any of us. Zusak's main characters are a 9-year old girl, Liesel Meminger, her companion and young partner in crime, Rudy, and a Jewish refugee hiding in the basement of the house where she lives, herself something of a refugee in Nazi Germany during WWII. A wide range of secondary characters fill in all gaps and keep us reading with fascination, e.g. Liesel's adoptive family, especially her cruel and ascerbic foster mother, Rosa, who on occasion cracks to show a bit of humanity; the major's deeply depressed wife, who quietly allows Liesel to "steal" her books; Liesel's young comrades, and many more.

It is hard to pinpoint what it is, precisely, that makes Zusak's work so unique. But I knew it, felt it, instantly. Voice, yes. Style. A few experimental approaches in his storytelling, such as illustrations inserted in the novel with all errors present, just as Max wrote the text and drew the pictures for his young friend, Liesel. Death's narration is unique. There are many such details that all come together to form a story worth reading, worth hearing, worth understanding. It is the story of Liesel, a spunky little book thief, who does far more than steal good books. In our smallest, we often find our greatest heroes.