Love and Vodka: My Surreal Adventures in Ukraine by R. J. Fox 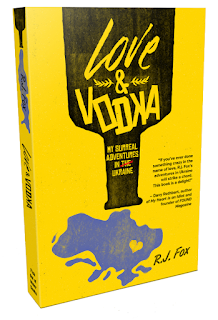 Love, science reveals, is really just another form of madness. The brain undergoes similar changes, from the rational into the irrational, and the resulting pheromone chemical soup tastes like insanity.

Dearborn-native (Michigan) and author R.J. Fox would probably not debate any of that. It took all of twenty minutes for him to fall in love with a foreign exchange student he spotted in a line for an amusement park ride. When she returned to her native Ukraine, he followed her, engagement ring in his pocket. And more madness ensued.

In his memoir, Love and Vodka: My Surreal Adventures in Ukraine (Fish Out of Water Books, October 2015), Fox recounts that initial meeting with Katya and the trip he took to Ukraine a year later to bring her back to the States again—as his wife. His adventures on foreign soil as he works up the nerve toward a marriage proposal and earn the blessing of Katya’s family are both outrageous and hilarious.

Babushka-wearing old women curse him, snarl and chase him, threaten to splatter him with bleach. Well-meaning hosts force vodka on him in toast after toast that he finds he cannot deny, resulting in drunken stupors, cold outdoor showers, and barefoot walks across sharp-edged rocks in his underwear. And so the story unfolds as Fox learns about a culture and a world far different than his own. Within its traditions and people, he finds himself in comical situations, but he also learns lessons about himself, love, and home.

What has remained with him from that mad and maddening journey these many years later, Fox says, “is the immersive experience of being in a whole other world than the one I know. Out in general public, people had a distrust toward me because I was not from Ukraine. This was in 2001, so not too far removed from the Soviet years when Ukraine was the center of missile-building during the Cold War. The distrust—it was the closest to feeling discriminated against that I’d ever known in my lifetime.”

In inner circles of what would increasingly become family, however, Fox found warmth, love, and family connection, not unlike what one would find in any family anywhere, and all liberally christened with yet more vodka. Although the resulting marriage would last only eight years—Fox is now remarried and has two children—he holds his memories of his Ukraine adventure close to his heart.

The memoir is the first publication of a new Ann Arbor-based publisher, Fish Out of Water, run by Jon and Laurie Wilson.
Posted by Zinta Aistars No comments: