Somewhere Over the Pachyderm Rainbow: Living in an Elephant-Controlled 2010 Election Diorama

A Collection of Political Poetry Musings by Jennifer C. Wolfe

Another election looms, and while this collection of political poetry musings by Jennifer C. Wolfe is dated for the 2010 elections, little has changed; they apply just as well today, if only with a few updated news headlines.

If you are a conservative in political leaning, duck. Wolfe doesn’t hold back, doesn’t mince words, isn’t shy about going for the Republican jugular. Her poetic musings take on not only the election that handed control of the U.S. House of Representatives to the Republican Party, but addresses many of the headline events of the past few years—the Arizona shooting of Congresswoman Gifford, the 9/11 responders’ battle to receive ground zero health care reimbursement, Sarah Palin’s hold on God’s ear, Rush Limbaugh’s tantrums over the airwaves, George W. Bush from every sorry angle, the election of America’s first African American president, and more. Much more. No elephant dropping is left unturned, and Wolfe comes in blazing, and turning, and blazing some more.

Ah, vitriol—the new Geritol.
Swallow two pills and bash your opponent’s head in, in the morning.

To be fair, bashing happens on both sides, and Wolfe bashes away with gusto herself. And that’s where I give her high marks. How refreshing! How rejuvenating to hear someone care so deeply, so hotly, about current events and all that goes on in our body politic. Apathy has been too long a national cancer, and if one thinks it doesn’t matter—vote or don’t vote, pay attention or don’t, follow current events or change the channel—oh, it does. We are where we are precisely because too many of us have had our blinders on and couldn’t be bothered.

If you lean right, even a little, this collection will rile you—and that’s good. Will it inspire you to toss out a bit of vitriol yourself? Good. The important thing is to care enough to blink an eye, because that’s when change really begins to happen. If government isn’t what it should be, look in the mirror. We the people, you know?

What earns my respect most is passion, and Wolfe brims with it. I’m not sure I would use the word “poetic” to describe this collection; I see little of poetry here. The closest we get to poetry is the occasional beat of a steady rhythm in line pairings. I would cross that word out of the title and leave in, simply, musings, because that is what these are, and Wolfe muses loud and clear. Vitriol alone, however, while crucial to get the fire burning, won’t be enough. Caring must inspire action, and there are plenty of ways to create change, become involved, do the work, build the dream you want to see. If this collection moves any reader to that, I thunder applause. 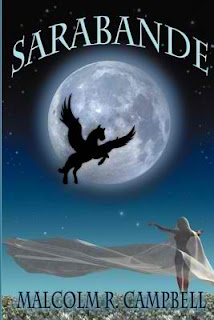 
Matter of taste, and mine has never led me, not easily, to fantasy or science fiction reading—yet Malcolm R. Campbell, with his fantasy novel Sarabande, easily pulled me in. The main character, our mythic heroine, is Sarabande, and she appeals in every way to the female reader. She is street smart at the same time that she is savvy, and even as she enters a world unknown to her, she is sharp and strong enough to find her way through challenge after challenge, disaster after nightmare.


Sarabande’s quest is to find her own peace—she has been haunted by her dead sister for years. Her quest takes her into the past to settle the unsettled with her sister Dryad, an anti-heroine, or to take her place in her sister's grave. She travels through Montana and Illinois and across time to accomplish her mission, but encounters a nightmare along the way in the shape of a man, Danny Jenks, a brutal truck driver without conscience.


Campbell describes a rape scene that is difficult to read, yet at the same time, earns my respect with his skill in describing this scene, and its aftermath on the woman. Indeed, I had to keep reminding myself I was reading the writing of a male author. It is rare to find this ability in an author to cross genders even in everyday basics such as conversation, mannerisms. To do so in describing the effect of rape on a woman’s body and psyche is nothing short of amazing. Campbell nails it: her anger, her pain, her humiliation, her ferocity that eventually takes her from victim to survivor to avenger.


Blending the fantasy world near seamlessly with reality, Campbell takes the reader from one world into the other and back again with such ease that the reader can easily enter the world of suspended disbelief required to read fantasy. Flying horses vanish and reappear. The dead rise from their graves. Magical beings intermingle with humans. And, not least magical, Campbell avoids cliché deftly, finding new ways to express scenes that could easily fall into the former category:


“Sarabande pushed the hood back and let the wind seize her hair and jumble it with the stuff of clouds.”


See? Dipping one toe into an image that could make one wince, he manages to dance away with fresh expression. It works.


Sarabande is a satisfying read. We are given a heroine we can understand and with whom we can sympathize. We travel alongside her through conflict and challenge, cheering her on. She suffers and endures, and finally rises above. How she does this … you’ll have to read for yourself.


Malcolm R. Campbell is the author of two other fantasies, The Sun Singer (who returns in this novel) and Garden of Heaven: An Odyssey, also a comedy satire called Jock Stewart and the Missing Sea of Fire. He lives in Georgia.