Are Men Necessary? When Sexes Collide by Maureen Dowd 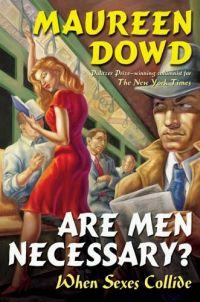 Is this the bashing of a gender? I picked up the book with curiosity piqued by a controversial title, "Are Men Necessary? When Sexes Collide" by Maureen Dowd, a Pulitzer-Prize-winning New York Times op-ed columnist, who has long been a favorite of mine because of her biting and inciteful (and insightful) commentary. The noir cover incites nearly as much as the title, with a redhead in a bright red clingy dress and red stilettos, surrounded by a busload of leering men. One might think this tome will give the male gender a sound whipping.

Indeed, the more I read, the more I realized Dowd, once again, will not disappoint. This book is, as she clearly states in her introduction, all about asking questions and offering a selection of informed and educated opinions on gender issues in contemporary American society. No answers, and that should not surprise, for these are issues as old as time, as old as humankind, that will undoubtedly occupy the minds of both genders as long as we cohabit the same planet. There are no firm and fast answers. But the questions, oh, how they intrigue!

Who better to ask them, in a social commentary format, than Maureen Dowd? She offers her observations side by side with many authorities-scientists, professors, editors, journalists, politicians, business people, and many others-giving us a sometimes stunning, often humorous, always fascinating perspective on gender differences, and, more importantly, gender responsibility for how we interact and how we co-exist. Truth be told, by the time I reached the final page, if any one gender had taken a bashing, I figured it was women who came through the muck looking the saddest.

But it isn't a bashing. Rather, Dowd's book is more of a call to awareness. A pause to take a long, searching, honest look into the mirror to see what we have become. The final look for men seems to be one of little change over time. Still hyper-focused on the superficial and the external when they are, well, leering at women. The younger, the bustier, the flirtier, the better. Intelligence weighs in hardly at all, if at all, and later, it seems, it becomes a disadvantage for the independent woman. No, indeed, men do not come through this examination well. The overall perspective is that the Y chromosome carriers in our society have come very little distance since the days of the caveman who thought mostly with his, um, gonads.

Women do not fare better, though, and as one who carries the X chromosome, I intend to hold myself fully accountable for our shortcomings. Dowd writes of the American woman's obsession with youth and her futile resistance to aging, unhealthy diets, plastic and cosmetic surgery to make herself into ever more superficial, if not downright cartoon character (think Jessica Rabbit) proportions impossible for the human body without surgical assistance. And all to please men. Who, chances are, will be pursuing our much younger sisters with lesser brain power anyway. Sad.

What happened to feminism? Dowd asks. And it is an important question to ask. It lasted, she says, a nanosecond. An ill-defined movement that quickly ended up zigzagging into nonexistence, and who can argue that today, when women still lag well behind in earning power, even while we continue to sell ourselves out in objectifying poses. We've come a long way, baby? It seems not. If liberation has led us to plastic surgery to deform ourselves and accepting the objectification men have pushed upon us in every venue, then from what exactly have we been liberated?

Perhaps it is a good thing that feminism is dead. From Dowd's observations, which often match my own, it seems we need a new movement, a new term that encompasses BOTH genders, liberating us all from bad behavior and stifling cookie cutter models of beauty. A consensus of liberating both genders from stereotypes, and a balancing of the wonderful differences in both to balance each other in work and romantic relationships. If the Y chromosome has weakened, then it seems men can learn from women how to be more emotionally courageous, while women can learn from men to loosen up now and then. Brute strength is not the only kind of strength, and it carries less importance (if any) today. It seems a valid guess, that the man of tomorrow, if he is to survive, will turn away from objectifying women (leading nowhere, after all, in evolutionary terms) and develop his EQ and not just his IQ. He will be the sought after mate, he will be the long-term survivor.

Ladies, our lesson is to accept aging more gracefully. Love the woman in the mirror, and embrace her idiosyncrasies. There is no future in being a mannequin without personality or character. No man is worth that kind of self-sacrifice.

Surely, there is an important message for both genders in this book. I read it first on my own, then read it a second time with the man in my life, and we both agreed: this is not gender bashing, this is a solid tap on the noggin to wake up, see the path we have chosen, and change its direction while we still have time.

Dowd's willingness to show herself and her own life in this "collision" of genders, sometimes with her own gender, is refreshingly honest. Known for her penchant for privacy, I respect her openness about moments when she did not shine. One can imagine how much criticism she invites by writing this book; credit given for willingness to subject herself to it. Score one for feminine courage.

Viva la difference. We are the yin and the yang, and Dowd's final line shows her own opinion, or at least strong leaning, on the matter. For balance, for enlightenment about ourselves and each other, we do need to take this path hand in hand.

Highly recommended, and best read with your partner near by for discussion.
Posted by Zinta Aistars No comments: