Nothing More to Tell, stories by George Dila 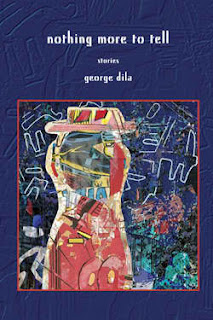 Nothing more? After reading the nine stories in this story collection by Michigan author George Dila, I'm betting he has plenty more to tell! At least, one hopes. Each story has a satisfying twist, an unflinching turn, and more times than not, an element of surprise. Good reading.

Then again, maybe we shouldn't be surprised. After all, Dila's stories are good reading because they are all so … real. These aren't the quests of heroes. These are stories of the average Joe, the middle-class guy with middling experiences and views, the guy next door with the door closed—until Dila opens that door for us to get a closer look. Unflinchingly authentic, even as one hopes that there are more heroes out there between these men that can often be difficult to like.

Each of the nine stories is set in a Michigan city, large or small, and they do have Michigan flavor, but could just as well be set anywhere. Main characters are all men, with the exception of "Four Letters to Angelie Jolie," which is just that, letters, written by a female maid who is trying to pull a fast one on a celebrity in an attempt to get adopted along with her children. Letters get nastier and baser as the only response received is a photograph signed by Jolie, apparently no longer adopting.

First up in the collection is "Lessons My Father Taught Me." The lead is a winner, instant hook:

"During the summer I was fifteen, on a muggy July night with nothing much else to do, my father and I began working together, stealing from our neighbors."

While this may not be the story of the guy(s) next door (hopefully), it has the element of the average in these two characters, father and son. The tensions in that relationship, the occasional power play, the coming apart and coming together, the hidden skeletons that finally surface. As in reality, it can be hard to know for whom to cheer. Life is never black and white, good and bad. Those we think we know, including ourselves, are never completely knowable. Shadows streak everywhere.

Other stories deal with aging, with family relationships including divorce, with the prejudices many claim to not hold but nevertheless have, and even—a janitor with a second life of being a hit man. "Pizza Pie" may have been one of my favorites, as the hit man who always insists on last words from his hits, to eventually have to say those words himself.

Dila hasn't reached bottom of this barrel. The ease of style in each story indicates the barrel is still full of more stories, and I look forward to their surfacing. While I couldn't like any of these main characters, hope not to meet any of them even as I am sure I have met at least some of them, I am intrigued by the author's sharp eye and willingness to tell that which makes us uncomfortable. There's truth in that.

George Dila's stories and personal essays have appeared in North American Review, Driftwood, Third Wednesday, Current, Traverse, Literal Latte, Christian Science Monitor and other publications. A native Detroiter and graduate of Wayne State University, George now lives with his wife Judith in the Lake Michigan coastal town of Ludington, where he directs the activities of Ludington Visiting Writers, a literary program he founded in 2001.