Booklover: A One-Year Journal of Reading, Reflecting and Remembering by Timothy James Bazzett 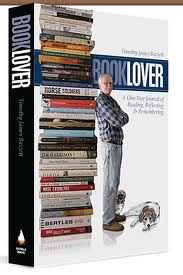 I met Tim Bazzett—virtually but not yet in person—through an email exchange about books. Of course. We exchanged thoughts about the novel of a Michigan writer that he felt, by reading some of my reviews, that I perhaps understood better than he. That got my attention. How many people do you know who have approached you to say you may just get something better than they do?

Sharp guy. Actually, I’m not sure I did get that book better than Bazzett, but we got a good conversation going, and one book leading to another, he sent me one of his own books: Booklover. Is this going to be a very long, elaborate listing of all the books this book addict has ever read? I wondered. Well, something along those lines. Only Bazzett adds in plenty of his own lines, managing to tell his story while talking about the stories written and told by others.

Booklover is one of several memoirs Bazzett has written. He begins by expressing his disdain for the reading fare that kindergartners are given, if the children are given books to read at all, and with that introduction, he had me on board.  (I, too, am an admitted book addict.) From there, this memoir describes Bazzett's moves from Michigan to California and to Europe, part of that being his military service. It is also the story of his marriage and the family.

It's a down home story, and Bazzett tells it in a friendly, easy style that makes you feel like you are sitting on the front porch with him, making friends. He can be charmingly self-deprecating, willing to open his door to the reader in a frank manner, if sometimes perhaps a bit too frank. There are times that I don't want to know where his guy's mind wanders, moments that tingle on my feminist bone when he muses on the female gender, but in the next moment I've forgiven him, because, well, he just comes off as a genuinely nice guy.

I could also do without the repeated "but no matter" continuously inserted into the telling of Bazzett's story, but that's it, those are my only complaints. Bazzett is a classic. He excels at being himself, no pretenses, rather than trying to outdo someone else among the literati. He has a fun way of inserting his sense of humor, even while building up the reader's desire to go to the nearest library or book store and bring home a mountain of books to read that Bazzett has recommended. It is with his insights into literature and authors that we realize just how sharp-minded he is. I hope I do get to sit on his front porch, or mine, with him sometime.

Bazzett lives in Reed City, Michigan, with his wife and his books. He has published five memoirs and a biography. He is a book reviewer for The Smoking Poet.

The Watch by Joydeep Roy-Bhattacharya 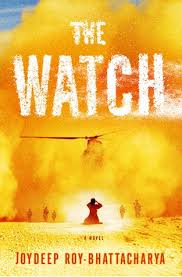 I avoid war novels. Until I find a really, really good one. In recent weeks, The Watch is one of those that qualified. I have a difficult time reading about human cruelty, and that is, after all, what war is about, in excess and in extreme. I make exceptions, however, when the writing is exceptional and the subject matter can teach me something I don't yet know and should.

Even as the war in Afghanistan has been going on for too many years, I realize that I don't really have a strong understanding of it—and honestly, I'm not sure this novel has changed that. Let's face it: war is beyond understanding. It's madness. But author Joydeep Roy-Bhattacharya has captured something of the essence of every war and revealed it to us in this novel, including the human spirit that survives it and even overcomes something of the madness.

The Watch is the story of a Pashtun woman who has lost her legs during the war, approaching a U.S. Army base in Kandahar to demand the return of her brother's body. Weary from battle, the soldiers have no idea what to do. The woman, in part based on the myth of Antigone, positions herself in the desert outside the base and refuses to move. Maybe she's a terrorist, wired with a bomb the moment she is approached. Maybe she's lost her mind. Maybe she is in disguise, not a woman at all. The soldiers debate what to do, as the intensity of the situation escalates and reveals what war does to those on both sides of the battle.

After reading the book, I had the privilege of interviewing the author in the Spring 2013 issue of The Smoking Poet, and Roy-Bhattacharya spoke of the philosophy on which he built his novel, the ways in which he did research to paint a realistic scene without ever visiting Afghanistan himself, the role of women in war, and his feelings about passivity when encountering war. It makes for fascinating insight.

As a writer, though, it is the level of quality in writing that gets my attention most. Roy-Bhattacharya wields a skillful pen. His story drew me in instantly, his characterization brought these people alive to me, and his literary talent added beauty to what is the ugliest part of human nature—our lust to kill each other.

Joydeep Roy-Bhattacharya was educated in politics and philosophy at Presidency College, Calcutta, and the University of Pennsylvania. His novels The Gabriel Club and The Storyteller of Marrakesh have been published in fourteen languages. He lives in the Hudson Valley in upstate New York.
Posted by Zinta Aistars No comments: