Before We Get Started by Bret Lott

When Bret Lott writes "I don't know" or "I know nothing" about the feel-your-way-as-you-go approach to the literary arts, he does it so eloquently that one can only say he "doesn't know" so very well. But he's right. Writing, art in general--there's no manual for it. And if there was, it would no longer be art. It would be reduced to a technical skill. And while skills can be learned, the extra mile beyond that gives life to a work of art can only be accomplished by the attitude Lott describes in his "practical memoir of the writer's life:" approaching the blank page, the blank screen, with an openness and acceptance for the wonder to come.

"What knowing nothing means, finally, is that one must strip himself of all notions of what he believes he knows about the world and the way it works," writes Lott. "...now it's new terrain, undiscovered, left to this new explorer, the one who knows nothing and who now, armed with this ignorance, stupidity, and tendency to stare, sees things newly... what this explorer will ultimately discover is his own heart, who he is in the midst of all the know-it-alls of the world."

Finding one's own way is the only way. From the beginning, Lott expresses his reverence for the written word. As a small child, he holds his first book--Book of Psalms, puzzling over how the words "somms" could be spelled so strangely. He writes his name, several times, for the first time, on the title page of this book, and in that moment of writing, making claim, and connecting with the written page, the writer is born.

Lott warns, even while reminding us that writing must be done in solitude, that crawling too deep into one's cave of solitude has its own dangers. We must know the world, and explore it fully, to write about it well. We must be a part of it. There is a balance to be achieved, with involvement, acceptance, immersion, and then withdrawal again. In short, one must live fully in a world with others, but one must write about it alone.

Chapters included in this book are each one crucial to the writer, a light in the dark to the beginner, but a healthy reminder to the well practiced and established, too. Lott's chapter on remembering the reasons for writing is priceless. One enters the horrors of writer's block only when one forgets the purpose for writing--and mistakenly gets caught up in the false pursuit of publication. While acknowledging that it is quite human to wish to share one's story once it is written, wanting that connection between writer and reader, if the writer becomes too obsessed with it, too caught up with it while writing, then the art quickly becomes bogged down and stalls hopelessly. The cause of writer's block, he says, is the writer him or herself. Writing is its own reward. The rest is another story.

The importance of simple words, character detail, narrative and passage of time, pitfalls of technique, risking failure, accepting rejection, these are all topics Lott addresses. Perhaps the best chapter is on rejection. Lott has published 9 books, one of them rescued from oblivion by American icon, Oprah, but even so, he keeps counting up rejections (he's up to 597 at the writing of this book) and he keeps each and every one (except one, that he threw away in a temper tantrum, but later admitted, he learned from this one, too, as he did from all of them). Rejection, he reminds us, is inescapable in the arts. No use fighting it. All the more reason not to become obsessed with it. The writer must be, he says, "moved to write not by a will toward fame or fortune or even posterity, but because the work of writing is good work, and the reward inherent to writing is the writing itself." Lott writes candidly and honestly about how much he feels the hurt of the pink slip, and in some ways it never gets easier, but he also presents a system that works for him. Basically, to keep submitting. He keeps a careful log of where his work has been, is being, will be submitted, and makes a point of sending out his submission the very day it lands back in his mailbox rejected. There is always reason to hope.

Lott's memoir of his own writing life is one of the most practical, yet most beautifully and honestly written books on writing I've read in many, many years. He writes with wisdom even when he is being most humble (and therein lies his charm). He writes with a down to earth voice on a level with all of us, no matter what our level, and in doing so, inspires.
Posted by Zinta Aistars 2 comments: 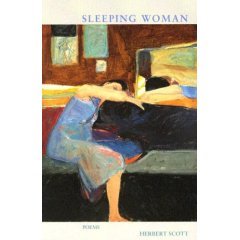 I had the great pleasure of meeting and interviewing Herb Scott in 2001 for a story I was writing for a local magazine about the Third Coast Anthologies and New Issues Press, of which he was founder and lifeblood. I had the renewed pleasure of hearing him read from Sleeping Woman in the past year, on his return to Kalamazoo in what, alas, turned out to be a farewell. Scott passed away not long after.

Sleeping Woman, as I reread it now, still hearing his voice in my mind, lives on to pass the joy of words well framed in meaning and rhythm for poets and those who love poetry long after the poet himself is gone. Scott's work is immersed in the wonder of the everyday and the everyman, shining upon it that precise angle of light that reveals its quiet magic. He writes of bread and how it breaks in the hands, a neighbor he nods and waves to every day but will never know, a homeless man sleeping on a sidewalk in Kalamazoo, November rain.

If I were to reach my hand
into the rich, wet leaves
and lift them to my face, I would smell
the season's blood, animal, insect,
the evidence of earthly living.
Each thing has left its mark, its scent,
all the ravelled fragments of birth
and death fallen into place.

In another poem, called "The Unforgiven," Scott writes about an observation he's made--that often when we transgress once, that is what marks our lives, although we have otherwise lived them well.

It is strange
how sometimes
no matter
if we live for years
a good and loving life
we are never forgiven
our smallest transgressions...

But we remember Herb Scott for his poetry, for his many, many good works, for his legacy of so many other fine poets that he has brought to light, and to the printed page with New Issues Press.
Posted by Zinta Aistars No comments: