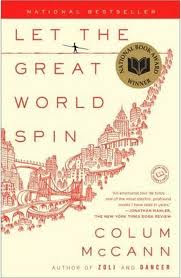 Now and then, and not so very often, a writer is more of a magician. Perhaps even a medium, channeling other voices, the medium between the reader and the world he creates before our very eyes--out of nothing, a great something. Such is Colum McCann. It wasn't long before I was reading this book with reverence, with realization that I was holding in my hands a work of art.

The opening of the novel is a view of the sky, a mile and some up into the sky, where a tiny dot sways gracefully on a thin wire, strung between those two well-known towers, now gone. Our eyes are drawn upward, as if we, too, stand there, on the New York City pavement, heads thrown back. This tightrope walker is a true event from 1974, and McCann has built his fictional world around him, below him, to catch him and that moment of impossible grace. From high in the air, the author brings our gaze down, down, to the very depths and darkest corners of this famous and infamous city.

We see pieces and shards of lives, seemingly disconnected, until by book's end we see--all things, all lives are connected, as if a by a thin wire. We step into the lives of an Irish priest, of a street corner peopled by hookers sharing heroin needles, of broken-hearted mothers with sons lost to war, of a Park Avenue judge with frustrated ambitions, and of colorful artists. These are not whole lives, nor whole images, but pieces, just the same way we glimpse the lives of those around us every day. As if we know them, yet we know no one, not really, not even ourselves. Yet their experiences are powerful in the way that our everyday lives are--living, dying, struggling with dilemmas, evaluating our values, getting by.

McCann's writing can be dense, but it is never out of tune. Never. Draw a finger along with each line, read it aloud, and you will never find one word out of place. He writes like life is lived, without pretension. He writes the way we think. Choppy sometimes, long and drawn out sometimes, disjointed sometimes, coming together again sometimes. His intuition of perfect rhythm is breathtaking. His ability to speak as others, as anyone else, is perhaps the most masterful I have seen in literature in many years, and perhaps even more, perhaps a lifetime of reading. I am dumbfounded by his ability to write cross-gender, a man who somehow is able to fit himself inside a woman, and not just any woman, but an African-American middle-aged grandmother who is a hooker, and the fit is... there's that word again... perfect. He has it. He has her voice. I forget him entirely when I read her, he is gone, she is all that is there, and she fills the room in our minds with her vivid and vibrant presence. He gets it, how she feels under her hundredth man of the day, and the next moment how she thinks of her daughter, her grandchild, and fights for her family. What author can possibly accomplish this? Colum McCann.

"The men were just bodies moving on me. Bits of color. They didn't matter none. Sometimes I just felt like a needle in a jukebox. I just fell on that groove and rode in awhile. Then I'd pick the dust off and drop again." (page 206)

She is an astounding character, embodying the shining best of a woman and the darkest and deepest kind of shadow. There is no judgment made about her, no lecture given, only a person presented, real and gritty and so close to you that you can see the blood pulsing in her temple and smell the sweat on her skin. Real. You can't just walk by her.

Another scene that stunned me with its mastery was one of a car accident, a moment in time captured as if outside of time. The author knows how time spins out in such a scene, and how our minds slow and speed again, replay the moment from a thousand different angles, spinning and spinning in a dizzying circle until all the colors blur together.

"The van spun farther. It was almost front-on. On the passenger side, all I could see was a pair of bare feet propped up on the dashboard. Untangling in slow motion. The bottoms of her feet were so white at the edges and so dark in their hollows that they could only have belonged to a black woman. She untucked at the ankles. The spin was slow enough. I could just see the top of her frame. She was calm. As if ready to accept. Her hair was pulled back tight off her face and bright baubles of jewelry bounced at her neck. If I hadn't seen her again, moments later, after she was thrown through the windshield, I might have thought she was naked, given the angle I was looking from. Younger than me, a beauty. Her eyes traveled across mine ... She was gone just as quickly. The van went into a wider spin and our car kept going straight.... The road opened like a split peach. I recall hearing the first crunch behind us, another car hitting the van, then the clatter of a grille ..." (page 116-117)

On and on it goes, that slow unweaving description, spinning us into its vortex, until the image of the spinning van and the woman flying through the windshield becomes a permanent burn on the brain.

McCann does it again when he describes how the trapeze artist practices for his masterpiece of a moment, walking the cable strung between the two towers. One would think the author once again peeled away his own skin, unzipped that of the high wire artist, and stepped inside. Not one detail is missed.

This is a novel that is nothing short of a ballet of words. Changing rhythms, changing lighting, never losing a step or missing a breath. McCann won the National Book Award for this book, but I would hold out for even higher awards. I am still trying to remember how to breathe as I come out of the spin, slowly, of his literary magic.

Colum McCann is the author of the novels Zoli, Dancer, This Side of Brightness, and Songdogs, as well as two critically acclaimed story collections. His fiction has been published in 30 languages. He lives in New York City with his wife and three children.